Phaistos was the second largest Minoan City in South-Central Crete. Mythological the construction of Phaistos is connected with Mino’s brother, Rhadamanthus. His dynasty reigned in Phaistos. Another version said that Phaistos was founded by the son of Hercules. The first palaces were built around 1900 BC and destroyed around 1700 BC. Immediately after their destruction they ware build new even more imposing and more luxurious then before. In the 15th century BC a new disaster flattened all the Minoan Neopalatial centers across Crete, included Phaistos. The view from an altitude of 100 meters will enchant you with the panoramic image and the imposing mountains of Psiloritis, Asterousia and Lasithi. Especially in the evening hours, the view is breathtaking. http://www.incrediblecrete.gr/26/index.en.html

Gortys, also known as Gortyn or Gortyna is one of the most important cities in Crete with an unbroken history of 6,000 years and one of the most extensive archaeological sites in Greece. Usually a visit to Gortys is limited to the archaeological site open to the public: the church of St Titus, the Odeon and the famous Plane Tree. But how representative is the picture the visitor gains of the grandeur of this city, once the capital of Crete? The city of Gortys extended across a wide area, but unfortunately only a small part of it has been excavated.  Stand at the entrance to the archaeological site and look across the road. You will see some blue signs which are usually ignored, but those curious enough to follow them will be amazed at what they see. Check for more info on http://www.explorecrete.com/archaeology/gortys.html

Kokkinos Pirgos is one of the nicest beaches in the neighborhood.  The more you go the right side of the beach, the less steep it goes, making it a perfect entrance for children. The beach is organized, meaning you have sunbeds and umbrellas. Mostly free of charge for the customers of the shops.

Kalamaki is also organized, a bit more touristic, with different restaurants, shops, and ATM in the village. The beach is nice; the sea has rocks inside the water.  Those rocks create a few ponds, perfect plunge pools for the little ones.

Kommos is a beautiful beach that starts north from Matala and reaches Kalamaki. The first part of the beach where the archaeological site is located is with umbrellas and taverns. While on the North beach (River area) the area is indicated for nudists.

Agios Pavlos is a remote beach mostly visited by the Greeks.  It is definitely a lovely remote sandy beach with crystal clear water that is worth a visit if you don’t mind driving on winding roads.

The two touristic villages, Agia Galini and Matala are worth a visit. Agia Galini is a cozy harbor village, with small alleys and lots of souvenir shops. Matala is known for the hippies, and famous caves from Matala and off course also known for his souvenirs.

The small typical village of Vori has the ethnological museum, small but worth a visit. https://en.wikipedia.org/wiki/Museum_of_Cretan_Ethnology Last year it opened at 11h and closed at 17h with entrance 3,00 euro per person.

From Kokkinos Pirgos you have a boat trip going to Paxi Madi, a small island.  The trip is a whole day, leaving 10h30 from the harbor and return at 17h. It is a very lazy day with nothing else then boat, sea and beach.  You need to make a reservation to get on the boat (contact me for this) Ticket was last year   40 euro per person with bbq included. Children get reduction. It is a nice place for snorkeling. You need to reserve your place on the boat. Just contact me, I can fix this for you.

New from 2018 is the Cretan Zeus Park. It is located on the flank of the mountain. So take care that you wear good shoes!  Cretan Zeus Park is a huge park that gives a good impression of Crete. Their aim is narrate and preserve the history of Crete from the Minoan era until the present day. So the young can lean and the elder can remember. You can find an assortment of herbs; get an impression from the old crafts, etc. Get a preview on http://cretanzeuspark.gr/?lang=en

A nice and easy gorge is Agio Farango, located at the south of the village Sivas. You continue by car direction south and you will see the parking place at the entrance of the gorge (don’t leave your car at the monastery!). Take care here, not to park underneath the trees. The goats that are grazing in the neighborhood prefer the highest leaves, meaning that they will use the car as steps to reach the higher leaves. From there it is a nice walk from 20 minutes up to half an hour to reach the bay. This bay is a beautiful place with a lovely beach and crystal clear water. Off course you have to walk back to the car afterwards. Notice that it is a deserted bay, no sanitation available.

A small wetland was created by the crater of the source Votomos by the end of the 80s, just north of the village of Zaros, right at the base of the mountain. In 1987 they created a small artificial lake there with the interventions of the Forest Service. Nowadays the lake and the area around turned out to be one of the major forest recreation areas of the island. The lake, the green area, they attract visitors from all over the world. This excursion can be easily combined with nice food in one of the taverns there. The place is known for the fresh fish trout (Forelle).

For the hikers it is the best place to start the Rouwas gorge. Just behind the lake of Votomos you have the entrance of the gorge, some wooden steps. You should count 4 to 5 hours to make this hike completely. Off course you can enter and take a taste of the beauty and returning the same path whenever you feel like it.

In the small village of Axos, close to Rethymo you can admire lovely sculptures made out of wood. 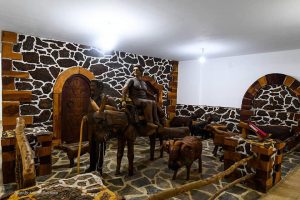 The Holy Monastery Of Odigitria is located in the Southern part of the prefecture of Heraklion on the massif of the Asterousia Mountains and is one of the oldest monasteries in Crete. The monastery was built in the 14th century and was surrounded by a wall. Some parts of this wall are preserved even up till today. Inside the Church you will find holy vestments, unique murals, an icon screen of the church painted by the famous Angelou, and more. The Odigitria Monastery also played an important role in the liberation Fights. The Monestary protected not only the preservation of the Orthodox faith, but protected also the population from the Ottomans. Today the Monastery still exists with monks and is working properly. The peace and serenity of the soul that someone feels when visiting the Monastery of Odigitria cannot be described by words. Without doubt, definitely worth your visit ! (It can be easily combined with a walk through the gorge of Agio Farango, see later). You drive direction Sivas and will see the signs. http://www.imodigitrias.gr

This is one of Crete’s most famous monasteries, close to the village of Zaros. It played an important role during the years of the Cretan Renaissance, both in the letters and the arts, and, during the last centuries of Venetian rule, it was known for its many scholars, artists and venerable monks. The monastery reaches its highest cultural development under the Venetians. The Turkish invasion in 1669 marks the beginning of its decline and the monastery is violently attacked by the Turks during the periods of Cretan rebellion. In spite of the fact that the walls of the monastery are practically completely destroyed, they still retain their fortress look and the church stands in the middle, with its double nave dedicated to Saint Anthony and to the Apostle Saint Thomas.  The present-day entrance to the monastery is new, but one can still distinguish the old one with its impressive central arch. The bell-tower is independent from the church and bears the influence of the catholic style of the time. In the interior of the church, along the walls of the double nave, some of the remarkable wall paintings are still visible The fountain Outside the monastery walls, under everlasting plane-trees, there is a beautiful fountain, one of the island’s most important outdoor sculptures, a unique heirloom of its time. It represents Adam and Eve in relief and water pours out from the mouths of four figures representing the rivers of Edem. http://www.interkriti.org/crete/iraklion/vrontissi_monastery.html

The nowadays female cenobitic Monastery of Panagia Kaliviani is one of the most important churches of the neighborhood. There has been a male monastery on this site since the Byzantine era, and the chapel of Zoodochos Pigi, where the miraculous icon of the Annunciation was found, was built on its remnants. The convent was destroyed by the Turks and the monks were avowers and martyrs for their Faith. The books of the monastery date back to 1873 and prove the charity work of the monastery.  In 1927, Bishop of Arkadia ordered the construction of the Holy Temple of the Church of the Virgin Mary, which now constitutes the Cathedral of the monastery. In 1956 , the new Bishop  studied the needs of the region and decided to organize charitable work in the area of the monastery, which was converted into a convent when the first sisters were ordained to the worship of God and charity. Nowadays, it accommodates weary and traumatized souls and it aims for the proper mental development of children and their smooth integration to society as a whole. At the same time, there are laboratories of vestment tailoring, weaving, an ecclesiastic and folk art museum, an elementary school and a kindergarten for the children from local institutions, as well as a summer camp in the Red Tower for the holidays of children living in institutions.

In the village of Kalamaki are 2 swimming pools (with entrance fee) Petrini Politeia. (is on google maps ,where you can see some pictures) it is close to Petrokefali. At the outside of Mires is the swimming pool Dream Fun Park. You can follow the signs from the main road Timbaki – Mires, at the crossing to Galia. Agia Galini, “no problem” at the outskirt of Agia Galini is a very nice swimming pool. (Also with nice food in their restaurant)